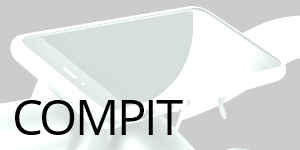 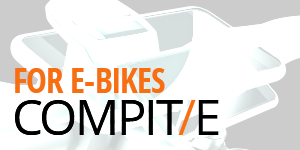 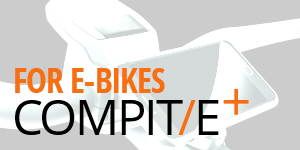 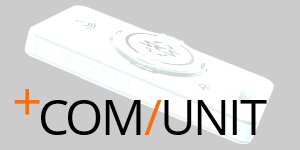 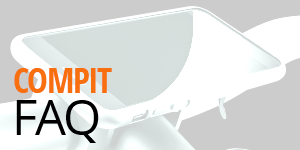 The smartphone holder for all conventional handlebars and front-end combinations holds your smartphone safely and securely even in extremely rough terrain. With a twist, you can affix your smartphone horizontally or vertically thanks to the oversized bayonet attachment and can move it into the desired position by adjusting the angle.

THE HOLDER WITH POWERBANK

The COMPIT+ system consists of a smartphone holder and Qi-certified +COM/UNIT with integrated NFC chip. Every mobile device equipped with a cordless charging function can be connected with the Qi-certified +COM/UNIT and charged on the go – at any angle and with in use. Attach with a twist via the oversized bayonet mount.

THE HOLDER FOR E-BIKES

Developed especially for e-bikes with Bosch Intuvia/Nyon displays, the COMPIT/E smartphone holder is adapted in order to build up an integrated unit on the handlebar between the smartphone and the E-Bike-display. With a twist, you can attach your smartphone horizontally or vertically thanks to the oversized bayonet mount and can move it into the desired position by adjusting the angle.

THE HOLDER WITH POWER FOR E-BIKES

The COMPIT/E+ system consists of a smartphone holder and Qi-certified +COM/UNIT with integrated NFC chip. Connected to the e-bike’s power source via USB interface on the board computer, the sophisticated technology allows your smartphone to charge wirelessly while riding. A twist secures the unit onto all conventional handlebar/front end combinations and allows for any angle.

MORE THAN A POWERBANK

QI-CHARGER (wireless charging)
The Qi-certified +COM/UNIT charging station allows you to charge your smartphone wirelessly while riding – at any angle and with simultaneous use. Mobile devices that are not equipped with wireless charging can be connected and charged via the USB connection on the +COM/UNIT. Attach with a twist thanks to the oversized bayonet mount.
NFC-CHIP (NEAR FIELD COMMUNICATION)
With NFC-capable smartphones, the NFC chip integrated into the +COM/UNIT can be equipped with various functions, such as the SKS MYBIKE-APP.

How long is the warranty that SKS GERMANY offers for the COMPIT system?
All of the components that are included as standard are covered by a 5-year warranty from the date of purchase. SKS GERMANY provides a 6 months warranty for all of the wearing parts – especially the +COM/UNIT battery unit.

Are the COMPIT and the COM/UNIT available separately?
Yes, the COMPIT smartphone holder can be ordered separately and the +COM/UNIT battery unit can also be purchased later.

The +COM/UNIT battery unit is included with the COMPIT+ and the COMPIT/E+.

Which light fits onto the bracket?
You need a light with a maximum light base width of 12 mm. The minimum drill hole diameter has to be 6 mm. A LUPINE SL can also be directly mounted without an adapter. The light is simply mounted on the clamping arms with the light adapter using the LUPINE mounting screws.

Which COVER can I use if I do not have one of these smartphones?
There is a universal adapter available that can be adhered to an existing hard cover (silicone, soft and multi-piece covers are not suitable ). The mounting is self-adhesive and should be attached to the centre of the cover if possible.

Can I also use the COM/UNIT when it is raining?
Yes as the COM/UNIT is produced with a IP54 weather protection rating.

Does COMPIT also fit on an aero handlebars?
The system is suitable for use with all handlebars that can be combined with a front-end combination and has a clamp diameter of 22.2 mm / 25.4 mm or 31.8 mm. The clamp diameter has to extend over a minimum width of 70 mm.

Questions concerning the charging of the COM/UNIT and the smartphone

How do I charge the smartphone using the COM/UNIT?
Charging takes place inductively ( wirelessly ) after mounting. Should you have a smartphone that does not have an inductive charging function, you will require a matching charging cable. This is also available from SKS (Lightning, Micro USB and Type C USB).

How do I know which is the right cable for my smartphone?
You can determine this by looking at the USB cable outlet.

What is an NFC chip?
NFC (Near Field Communication) is a radio standard for a contactless data transfer. The chip enables NFC-capable mobile telephones ( currently only Android ) to be equipped with diverse individually programmable functions.

How is the chip programmed?
The setting functions are programmed using a trigger app. You have to download this from Google Play.

What is a Qi-Charger?
This technology makes it possible to transmit energy over short distances by means of electromagnetic induction ( inductive charging ). The +COM/UNIT that is certified with this standard is able to charge your smartphone wirelessly on the basis of the Qi standard.

How long does it take for the +COM/UNIT to recharge?
A completely empty +COM/UNIT takes approx. 6 hours to recharge, depending on the charger.

Can I use my eBike to charge my smartphone while riding my bike even if the +COM/UNIT has no charge?
Yes, but the smartphone has to be in standby mode.

Can a smartphone be directly charged via the Bosch Intuvia Display (without a +COM/UNIT)?
Yes, that is theoretically possible but the output current is so low (<0.5 A) that it is not possible to charge the smartphone and use a navigation app at the same time.

Which eBike motor manufacturers are COMPIT or +COM/UNIT compatible with?
With all of the manufacturers in theory but this is subject to the following requirements: the handlebars need to have a diameter of 22.2 mm, 25.4 mm or 31.8 mm and the front-end combination width or the front-end combination cap has to be max. 49 mm. The board computer has to be equipped with a micro USB current outlet (can also be altered using an adapter). Another requirement is that the eBike drive system has to have a 5V-15V outlet and the current has to be a minimum 0.5 A.

Why is the +COM/UNIT not charging my smartphone?
Ensure that the +COM/UNIT is switched on and is sufficiently charged and that the cable adapter is correctly positioned.

Does the COM/UNIT support the ‘pass through’ technology?
No, they can’t. The COMPIT system holds the smartphone reliably and it’s low in vibration. Therefore it’s really easy to use the smartphone and to read what is indicated on the display. Furthermore, the stable and micro-steamed COMPIT mount prevents a damage of the sensitive electronic components of the smartphone.

Can vibrations which are caused by uneven ground damage my smartphone during a ride?
Yes, it does. You can simultaneously charge the COM/UNIT with frame contact or with a USB-Port of the E-Bike and discharge it by charging your mobile device itself (with cable or wireless).