SKS Germany in the Himalayas 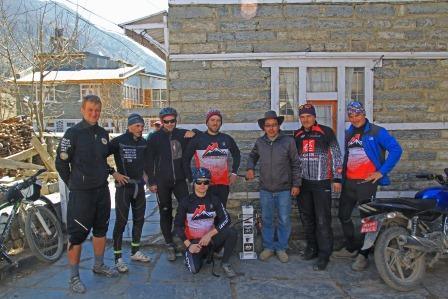 Recently a Bike-Repair-Station was installed in the Himalayas. Partner and sponsor of this project is the family enterprise SKS metaplast from Sundern, Germany.

The village Manag lies 3540 meters above sea level in the Himalayas (Nepal) and is an important stage point of the trekking route Annapurna Circuit, which is not just popular with hikers but also with bikers who want to demonstrate their skills. Besides, once a year the hardcore-bike-race Yak Attack takes place there.

Now a SKS bike-repair-station stands right next to the best hotel of the village, the Hotel Yeti. J. , in which also many bikers stay over. Due to the height of the place where it is installed, the station is the highest located one of its kind in the world. It offers both inhabitants and bike tourists the possibility to pump up their tires with an SKS AIRWORX floor pump or to repair small defects with different tools.

The station was built by the Polish company IBOMBO, which already has installed similar repair-stations in several Polish cities as well. Due to the high level of quality SKS products have, there was always an AIRWORX plugged into the stations and so IBOMBO catched the attention of SKS Germany. When the German company was asked if they would like to overtake the partnership of the Himalayas-Project they were enthusiastic about it immediately. Furthermore, SKS decided to buy an IBOMBO-station with SKS design to provide it to a local restaurant. More projects in corporation with IBOMBO are planned.