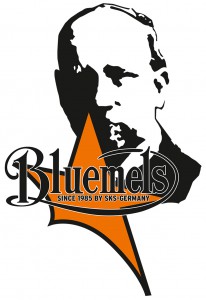 The English company Bluemel was founded in 1860 in East London by Charles William Bluemel and his two brothers. The Bluemel products quickly gained an excellent reputation in cycling and CW Bluemel & Brothers Ltd. expanded rapidly. In 1902, the company purchased an artificial silk factory from Mr. Joseph Cash in Wolston at Coventry, and in 1904 relocated production there. The company’s portfolio quickly expanded to include parts for motorcycles and automobiles. In 1913, the company became incorporated. In 1938, Mr. Ernest Adolphus Bluemel, the last of the three brothers, passed away. By this time, the company had expanded from an initial 150 employees to over 600A second generation of Bluemels, Frank William & Roland Edward, continued to expand the company after the death of the original founders.

In 1948, the company began to manufacture car parts for Jaguar and Austin Martin. By 1961, the portfolio included auto, bicycle, and motorcycle accessories, plastic moldings, dials, and nameplates. In 1983, the company faced insolvency. British Cycling wholesaler, Chicken, recommended to SKS owner Willi Blome to look at Bluemel’s pump and mudguard company in Coventry. 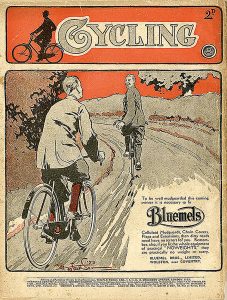 Since SKS had already engaged in the production of plastic mudguards, it was decided to take over the Bluemels brand-name and their production line. There were sections of Bluemel mudguard production which were better positioned than SKS production, such as in the settlement after the extrusion process, so the acquisition helped to advance SKS production/product. In August 1985, Willi Blome, SKS Manager Walter Scheffer & several SKS employees flew to England to prepare the equipment for shipment to Germany. Within weeks, there were 10 trailers of mudguard production equipment ready for transport. The Bluemel machines for manufacturing pumps were scrapped as SKS was the market leader for pumps and had no use for the equipment. The production machines from England were set up in a factory hall in Sundern. After many tests, rebuilding, and expansion, the first mudguard OEM contract for Hercules was made in the winter of 1985. Many production extrusion machines and assembly devices had to be brought up to date, and a 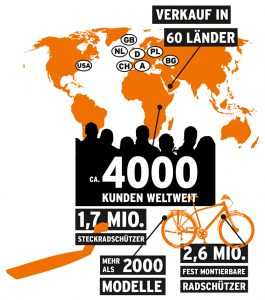 completely new stay production was built. In addition, the production of CAB mudguards with aluminum foil was added. The entry into the mudguard business has been an absolute success for SKS Germany. Over the years, the product range has been expanded and innovated. In addition to Bluemels, SKS was able to also acquire interest in well-known manufacturers such as San Giorgio, ESGE and Poker. Among other things, the infamous Chromoplastics series was added to the SKS line. SKS has also developed a diverse line of OEM special products for bicycles.

Today, SKS Germany is the world leader in sales of bicycle mudguards. Year after year, the portfolio has been expanded, whether through our own developments or creative collaboration with our customers.